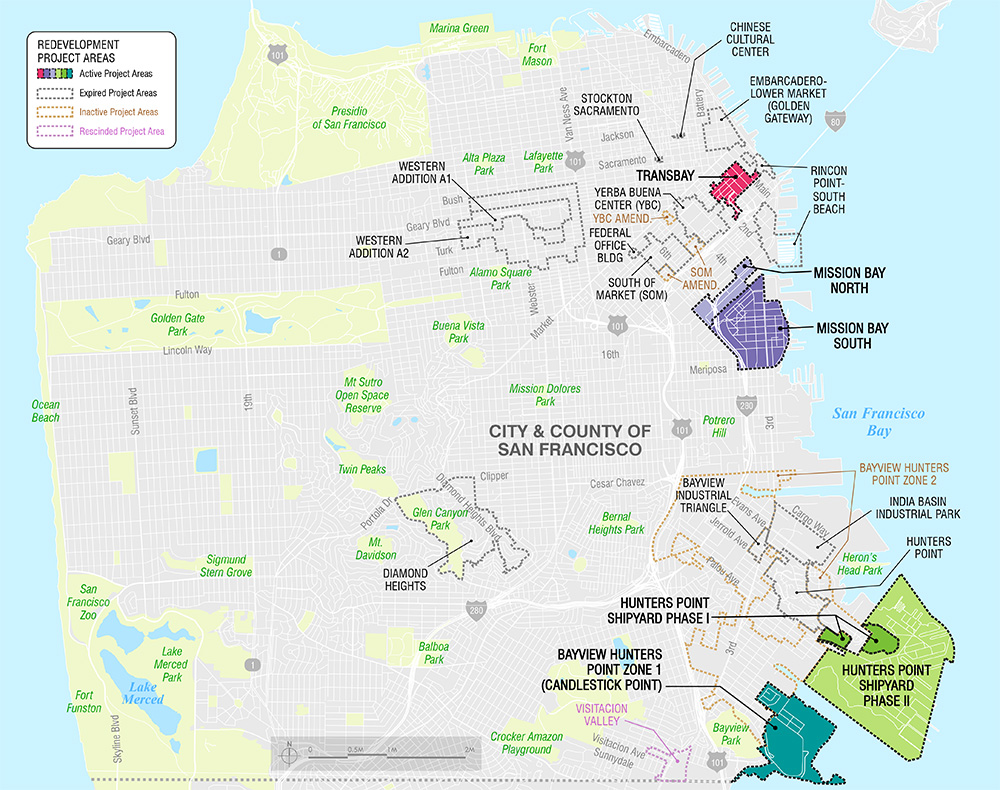 Prior to redevelopment, the 137-acre hill area was partly vacant land largely occupied by temporary wartime housing built by the federal government during World War II. The land was subsequently turned over to the San Francisco Housing Authority for it's housing program. The community in Hunters Point was largely responsible for getting the federal government to declare this area a redevelopment project in order to minimize the displacement of low-income residents. The large amount of vacant land in the area permitted the Agency to begin its new development program by constructing new low-to-moderate-income housing. When relocation was necessary, households were able to move from the old wartime housing into newly constructed units.

Adopted by the Board of Supervisors on January 20, 1969, the India Basin Industrial Park Redevelopment Plan formally expired on January 20, 2009. Among the principal objectives of the Redevelopment Plan was the establishment of labor-intensive industries in the area in order to provide job opportunities for the residents of the Bayview Hunters Point community. The Redevelopment Project Area is now a thriving industrial park consisting of a major distribution facility for the U.S. Postal Service, a number of light industrial, commercial service and multimedia businesses, and some retail businesses located at Bayview Plaza at the southeast corner of Third Street and Evans Avenue. Residential uses are not allowed within this industrial area.

The Western Addition A-1 Redevelopment Project Area was established in 1956 to eliminate blighting conditions in the area surrounding the intersection of Geary and Fillmore Streets, and to allow for the City of San Francisco’s plans to widen Geary Street into an east-west boulevard.  At the time, city leaders favored a boulevard that bypassed, via an underpass, the old Fillmore Street shopping district in favor of a planned shopping center at the peak of Geary Street where a major department store was already established.  In addition, the redevelopment program called for the closure of a portion of certain streets (i.e., Octavia, Ellis, Pierce, and O'Farrell streets) and a re-parcelization of properties for redevelopment.  The redevelopment program also called for the retention of certain existing uses, including churches, the Buchanan Street YMCA, existing medical offices and facilities, banks, hotels, a used car lot and a supermarket.

The Redevelopment Plan for the A-2  has been amended eight times, most recently on December 9, 2008, by San Francisco Board of Supervisors Ordinance 316-08 which approved an amendment to the Western Addition A-2  Redevelopment Plan to extend the Redevelopment Agency’s time for issuing and repaying debt and to suspend the limit on total Tax Increment Revenue for affordable housing development pursuant to Sections 33333.7 (Senate Bill No. 2113) and 33333.8 of the California Health and Safety Code which authorize the Redevelopment Agency to continue to receive tax increment after the expiration of a redevelopment plan to fund the replacement of affordable housing that the Agency destroyed and did not replace during the urban renewal era prior to 1976.

In 1988, the City and the federal government agreed in principal that the Federal General Services Administration (GSA) would construct a new federal office building in San Francisco, to consolidate agencies that currently occupy leased quarters. The new office building will accommodate up to 2,700 employees in the proposed 675,000 square feet facility. The GSA budget for construction and development of the new building is $120 million. To facilitate this major undertaking, the City agreed to donate a building site at no cost to the federal government.

Golden Gateway is the former location of San Francisco's dilapidated, congested marketplace for wholesale produce. With the assistance of the Redevelopment Agency, most of the produce firms were re-established in a modern produce terminal built for them near Islais Creek.

Yerba Buena Center is an 87-acre project, formerly an area of dilapidated hotels, commercial and industrial buildings and open parking lots. The project is located adjacent to the San Francisco downtown office and retail districts and includes the George Moscone Convention Center. It extends from Market Street on the north to Harrison Street on the south and from Second Street on the east to the west property line along Fourth Street. The project plan was adopted on April 25, l966 and though the project was halted for several years in the 70's by a series of lawsuits, the project was completed in 2006.

Rincon Point-South Beach is a 115-acre redevelopment project composed of two non-contiguous geographic areas along San Francisco's northeastern waterfront. Much of the area was formerly characterized by dilapidated warehouses, open cargo storage yards, abandoned or underutilized buildings, several piers in unsound condition and an extensive network of underutilized street rights-of-way. Since 1981, the area has been transformed into a new mixed-use development. It is located south of the Ferry Building and adjacent to both the Financial District and the City's waterfront.

The South of Market Redevelopment Project Area, created in 1990 as the South of Market Earthquake Recovery Redevelopment Project Area, was originally adopted to repair damage caused by the 1989 Loma Prieta Earthquake.  Since 1990, the Agency has been able to: 1) provide earthquake recovery assistance to residents and businesses; 2) improve housing opportunities by funding the construction or rehabilitation of more than 1,000 new affordable housing units; 3) fund the construction on Sixth Street of new, widened sidewalks with new street trees and street lights, which were completed in February 2006; 4) since 2002, provide façade and tenant improvement loans to property owners and neighborhood-serving businesses on Sixth Street and provide street cleaning services for Sixth Street; and 5) support community nonprofits that provide health care and other services that contribute to the cultural identity of the area.

The Bayview Hunters Point Redevelopment Plan (“BVHP Plan”) provides the implementation tools to carry out many of the goals of the Bayview Hunters Point Community Revitalization Concept Plan (“Concept Plan”). The policies and programs of the BVHP Plan incorporate community goals and objectives expressed in the Concept Plan, which the BVHP Project Area Committee (“PAC”), working with the Agency, adopted in 2000 following hundreds of community planning meetings, beginning soon after the PAC’s election in 1997. The redevelopment programs of the BVHP Plan are focused on three key areas: economic development, affordable housing, and community enhancements, described below. The Agency will continue to work through the PAC and other community processes throughout the implementation of revitalization activities in the BVHP Redevelopment Project Area (“Project Area”). The BVHP Plan also includes numerous safeguards to insure community involvement and oversight throughout the implementation of the BVHP Plan.